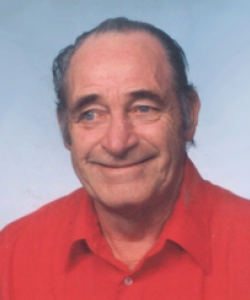 Harvey was born and raised in Proton Township, where he worked in construction, the shoe factory, and Rothsay Concentrate. He and Betty enjoyed traveling to Germany, Ecuador, and several islands. Harvey was involved with Mount Forest Ag Society and Camp Quality. He enjoyed his retirement at Pike Lake with family and many friends. Harvey spent his last year at Royal Terrace, Palmerston where he loved playing bells and bingo while making many new friends. Thank you to all of “his girls”, the nurses, PSWs and staff, that made his last year so enjoyable. Private funeral arrangements entrusted to England Funeral Home, Mount Forest.

Those wishing to make a donation in Harvey’s memory are asked to consider Royal Terrace, Palmerston or the Louise Marshall Hospital Foundation, Mount Forest.

Betty so sorry for your loss. Our deepest sympathy to you and your family.
Jim and .Ruth Penwarden

Condolences Betty and family in the passing of Harvey.

Betty, I'm so sorry to hear about Harvey 's passing. May God give you and yours the strength and peace you need during this sad time. May happy memories make you smile. Roslyn

Thinking of you all during this difficult time.

our Mason family has great memories of being neighbors of the Gillies family living right across the road in Hopeville for many years. Neither family knew if they had 3 kids only or lots of times 6 kids!! What a great life Harv had with Betty, his girls, and all the grandchildren. You were always welcome at their home. Lots of stories and laughs. Keep the memories close to your heart, luv Donna, Darlene and Bob

Dear Roxanne and your family, We were so sorry to read of your Dad's passing. Please ask Philip to give you a hug for us. May you feel the Lord's loving arms around you at this sad time. Sheryl & Bryan (Spring Valley)

Betty and Family....our thoughts and prayers are with you and your family at this time. Harvey was a very special man.

Betty and Family, cherish the memories and know that you are in our thoughts and prayers as you travel through this difficult time. Alma MacRae and Family

Dear Betty so sorry to read of you dear husbands passing...our deepest condolences to you and family Bill and Judy

What true friends are made of. Jerry and I will miss the smile but treasure the memories. Betty and family are in our thoughts. Hugs. Jerry and Marian Pauley

Dear Betty and family We have many memories of Harvey working at the fall fair together, always so helpful and smiling. Our thoughts will be with you in the days ahead. Sincerely Leonard Seifried Diane & Bill Dineen

So sorry to hear of your loss. I have a lot of fond memories, like just sitting while he playing solitaire.

Sorry to hear about Uncle Harve. Our thought are with you.

Dear Betty (of debbie and eye yi). So very sorry to hear of Harv’s passing. I know you will miss him dearly. What a great guy he was, always a smile. Pretty special to us. Harv and our Leslie sure had a bond between them. We are thinking of you and the entire family. He will be missed❤️

A lot of GOOD MEMORIES from years ago with friends. Al