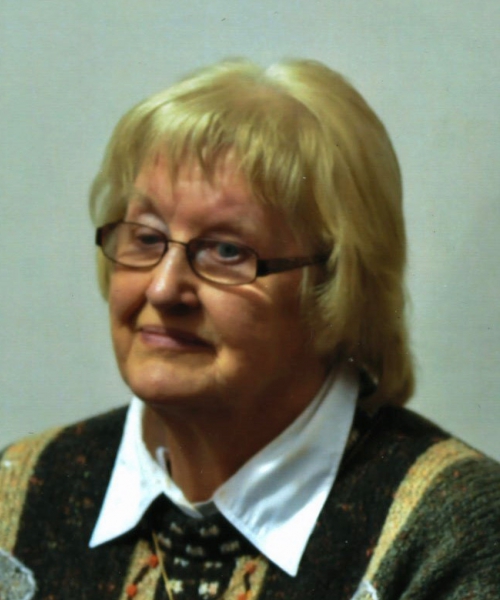 ROBERTS, Brenda Yvonne “Eve” – Eve Roberts was a force of nature. Born in Watford, England in 1934, she grew up to be a rebel, marrying young and having four children at an early age. She was not content with being just a mother, and with a partner started an entertainment agency in the UK, booking bands, comedians, and entertainers for local clubs and pubs. That is how she met – and later married – her second husband John, who, after 52 years of marriage, survives her and still lives in Mount Forest. Eve and John emigrated to Canada in 1977, after a short visit in 1976, and Eve decided to switch careers and became a successful Real Estate Agent, first in Toronto, then Brampton and Waterloo. When the opportunity came along to purchase the Ford dealership in Mount Forest, John and Eve moved here in 1989 and took over, successfully running the business for 14 years until selling and moving to semi-retirement. Eve had her three daughters join her in Canada over the years. Unfortunately, daughter Lynne died young, Kim moved back to England, and Wendy married and is living in Canada with her husband Wendell, two children, and three grandchildren, Eve’s great grandkids. Eve is survived by her husband John, daughters Kim, Wendy, and son Michael, many grandchildren and great grandchildren. She will be sadly missed by her many friends and family.

Thanks to the staff at Louise Marshall Hospital for their care and making the last few days of Eve’s life comfortable.

A celebration of life will be held at a later date – details will be announced. Those wishing to make a donation in memory of Eve are asked to consider the Louise Marshall Hospital Foundation or the Lions Foundation of Canada Dog Guides.  Arrangements entrusted to the England Funeral Home, Mount Forest.

My condolences to you John and your extended family. Eve was a memorable woman who never lost her feisty personality even as her body failed her. Rest In Peace Eve 💕

So sorry to hear of your loss, John. Our prayers are with you and the family.

So sorry to hear about Eve’s passing. We have so many memories of Eve .She helped me to pick out my most favourite car , we took trips to Toronto to buy freshly caught seafood, and probably the most important was sitting in your back yard watching the dogs play.
Her love of life, her great sense of humour and no mincing of words. That was Eve. She will be missed ! Harv and Cynthia Beyer

Our deepest condolences to you and your family. Fond memories of Eve having a drink and chat.
Hoping you’re doing well at this difficult time.

John,
Sincerest condolences to you…so sorry for your loss…

We are sorry for your loss. Send our most sincere condolences to you and your family.

John and Family. Sending our deepest condolences on the passing of Eve. So sorry for your loss. I have some fond memories of Eve sitting around having coffee and chatting. She was a wonderful woman who spoke her mind and let you know if she didn't like something. :) sending Love your way John. Thinking of you. XO

John and family, Our deepest sympathies to you and your family on Eve's passing. Eve and John helped me embark on an enjoyable 20 year career in the car business. I especially enjoyed the many get-togethers and home cooked meals during my single years. Karen and I have enjoyed our times together the past several years. Cam and Karen Noble

John my sincere sympathy on the passing of Eve. May she Rest In Peace
Sharon

Patti and I wish to extend our deepest sympathies to you on your loss. Eve will certainly be missed by so many in the community.

Our deepest sympathy to you John,
Brian Plume & Tamara Bondy

Years ago Eve hired Ruth and I to care for her flower beds. The first night when we got there she had us weed her vegetable garden. She must have decided we knew what we were doing, we sat on the deck and had a glass of wine and from then on we looked after the flower beds. Always wine on the deck after we were done.

John & Families...so sorry to hear of Eve's passing. We have so many fond and fun memories of our years with all of us together at the garage and events in and around the community. She was a great lady and will be missed. Brad & Cathy

Very sorry to hear the news of Eve passing. Our thoughts are with you. Take care John.

John and family we are sorry for your loss. Our thoughts are with you at this very difficult time. Wendy (MacEachern) & Carl Abbott

John, I was sorry to hear of Eve's passing, she was a force to be reckoned with and I have fond memories of my educational discussions with Eve. She was special and will remain a part of you. All the best to you and your family.